Massawa (/məsˈɑːwə/ muh-SAH-wuh;), or Mitsiwa, is a port city in the Semienawi Keyih Bahri Region of Eritrea, located on the Red Sea at the northern end of the Gulf of Zula beside the Dahlak Archipelago.[2] It has represented a historically important port for many centuries.

Massawa was the capital of the Italian Colony of Eritrea until the seat of the colonial government was moved to Asmara in 1897.[3]

Massawa has an average temperature of 30 °C/86 °F, which is one of the highest found in the world, and is “one of the hottest marine coastal areas in the world.”[4]

Massawa was originally a small seaside village, lying in lands coextensive with the Kingdom of Axum—also known as Kingdom of Zula in antiquity—and overshadowed by the nearby port of Adulis about 50 kilometres (31 mi) to the south.[5] Massawa has been ruled or occupied by a succession of polities during its history, including the Aksumite Empire, Abyssinia , Italian Eritrea and the Ottoman Empire. Following the fall of Axum in the 8th century, the area around Massawa and the town itself fell under the occupation of the Umayyad Caliphate from 702 to 750 CE. The Beja people would also come to rule within Massawa during the Bajag Kingdom of Eritrea from the year 740 to the 14th century. Massawa was situated between the sultanates of Qata, Baqulin, and Dahlak. Midri-Bahri, an Eritrean kingdom (14th–19th centuries), gained leverage at various times and ruled over Massawa. The port city would also come under control of the Balaw people (people of Arab descent), during the Balaw Kingdom of Eritrea (12th–15th centuries). At this time, the Sheikh Hanafi Mosque, one of the country’s oldest mosques, was built on Massawa Island. The city reportedly has the oldest mosque in Africa, that is the Mosque of the Companions. It was reportedly built by companions of Muhammad who escaped persecution by Meccans.[6]

In the struggle for domination of the Red sea the Portuguese ended up conquering Massawa ( Maçua) and Arkiko[7] in 1513 by Diogo Lopes de Albergaria, a port that they used for the entering in to allied territory of Ethiopia in the fight against the ottomans. King Manuel I ,first gave orders for the construction of a fortress that was never built. However, during Portuguese presence, it was lifted as well as the existing cisterns and wells for the Portuguese Navy watery.[8] It was drawned by D. João de Castro in 1541 in his ” Roteiro do Mar Roxo”[9] in their route to attack El Tor and Suez .The captain of the Arkiko was the Portuguese Gonçalo Ferreira, second port on the coast that guaranteed the presence and maintenance of the Portuguese fleets, whenever the port of Massawa was threatened by the Turkish presence.[10]

Until the mid 17th century Massawa was the main port that the Portuguese used, to maintain contact with their main Christian allies in the region. 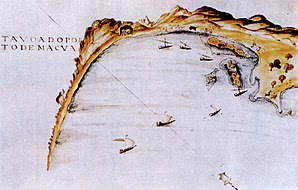 Massawa rose to prominence when it was captured by the Ottoman Empire in 1557. The Ottomans made it the capital of Habesh Eyalet. Under Özdemir Pasha, Ottoman troops then attempted to conquer the rest of Eritrea. Due to resistance as well as sudden and unexpected demands for more the Ottomans did not conquer the rest of Eritrea. The Ottoman authorities placed the city and its immediate hinterlands under the control of one of the aristocrats of the Bellou people, whom they appointed “Naib of Massawa” and made answerable to the Ottoman governor at Suakin.[11] The Ottomans nevertheless built parts of the old town of Massawa on Massawa Island into a prominent port on the Red Sea. These buildings and the old town of Massawa remain to this day, having withstood both earthquakes and wars with aerial bombardment. The rules were intermittent for long periods and it became an Italian possession in 1885.[12]

Massawa in the 19th century

In 1846, Massawa, and later much of the Northeast African coast of the Red Sea, came under the rule of the Khedive of Egypt with Ottoman consent.

Following Egypt’s defeat at the Battle of Gura, Egyptian control of the port withered. With the help of the British, the city eventually came under Italian control and became part of Italy’s colony of Eritrea in 1885.